In June 2018, Colorado Governor John Hickenlooper announced that his state would join 13 states and the District of Columbia in adopting California’s clean car emissions standards.

Throughout both rulemaking processes, the proposals faced pushback from oil industry defenders, auto dealers, and free market organizations tied to the Koch network.

5 Benefits of Colorado’s New Zero Emission Vehicle Program: An analysis by Conservation Colorado on why the ZEV mandate is important for residents of the Rocky Mountain State.

Who is Fighting Against Colorado’s Clean Car Standards

Americans for Prosperity: The Colorado chapter of the “the centerpiece of the Kochs’ political machine” lobbied against the LEV and ZEV standards, sending representative Shari Shiffer-Krieger to commission hearings and bundling public comments from members. 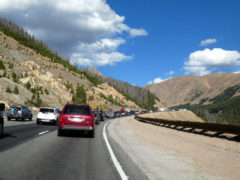 Colorado is moving ahead with a plan to get nearly 1 million electric vehicles on its roads by 2030 and, for the first time, has

In recent years, the majority of Coloradans have been struggling to breathe clean air, and tailpipe emissions carry much of the blame. Lawmakers have started